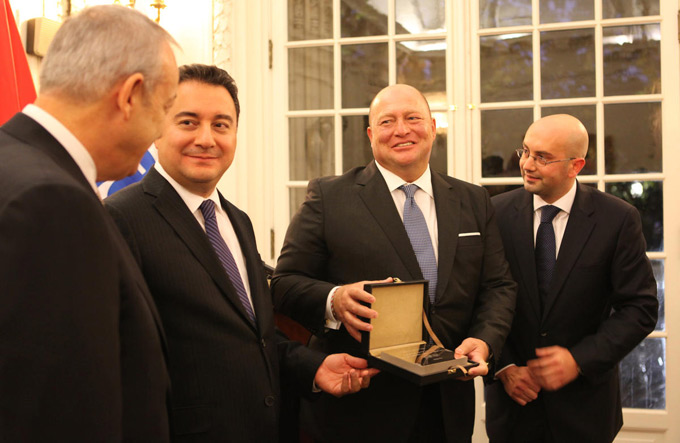 The TUSIAD Board of Directors hosted an evening reception on Thursday, October 10, to celebrate the anniversary of the Washington Representative Office. The President of the Board of Directors of TUSIAD Muharrem Yilmaz said, “We had established a representative office in Washington in 1998 to help improve Turkish – American relations. Our presence here signifies Turkish business’ commitment to deepening and diversifying this partnership.” Deputy Prime Minister Ali Babacan of the Republic of Turkey attended the reception as the guest of honor and extended his congratulations to TUSIAD. During the reception, Mustafa Koc, Chairman of the Board of Directors of TUSIAD – U.S., was recognized for his vision and leadership in support of the work of the Washington Representative Office.

The Vice President of the United States Joseph Biden sent a congratulatory note to the TUSIAD Washington Representative Office in honor of the anniversary. Vice President Biden wrote, “I want to congratulate you on TUSIAD’s 15th anniversary in Washington. Turkey’s success – as an ally and as a strategic, economic, and democratic partner – is profoundly in our interest. We will continue to count on TUSIAD’s good work to ensure that the U.S. – Turkey relationship remains strong in the years to come.”

The TUSIAD Board of Directors and President of the High Advisory Council attended several meetings during their Washington visit.

The TUSIAD leadership along with the Turkish Coalition of America (TCA) leadership met Speaker of the U.S. House of Representatives John Boehner and expressed the Turkish business world’s keen interest in Turkey’s inclusion in the emerging transatlantic economic area. TUSIAD President Muharrem Yilmaz said, “Despite being integrated with the European economy and transatlantic institutions, Turkey is not a party to the Transatlantic Trade and Investment Partnership (TTIP). This is something that the Turkish business world regrets. We believe that it will be counterproductive for the Atlantic alliance in general, for Turkey to be excluded from this new integration project of the Western world. In parallel to TTIP negotiations, concluding a Turkey – U.S. free trade agreement will be economically beneficial and strategically vital for our two countries. Such an agreement will also be in accordance with our long standing partnership.”

As Co-Chairs of the Caucus on U.S. – Turkey Relations & Turkish Americans, Congresswoman Virginia Foxx and Congressman Ed Whitfield hosted a luncheon in honor of the visiting TUSIAD delegation.

The TUSIAD Board of Directors also met with Assistant Secretary of State for Europe and Eurasian Affairs Victoria Nuland and discussed issues of importance to the U.S. – Turkey partnership.

The Brookings Institution organized a panel discussion on U.S. global leadership in the second Obama administration with the participation of Senior Fellow Robert Kagan, Director of the Saban Center for Middle East Policy Tamara Cofman Wittes and Professor Soli Ozel from Kadir Has University. The Brookings Institution TUSIAD Senior Fellow and Director of the Turkey Project Kemal Kirisci moderated the discussion. In his opening speech, the President of TUSIAD Muharrem Yilmaz stressed the importance of the U.S. – Turkey relationship and highlighted the work of the Brookings – TUSIAD partnership. Yilmaz said, “I am confident that [the Brookings – TUSIAD partnership] will soon be the main source of understanding and analyzing Turkey’s politics and its long-term direction.”

The Brookings Institution also hosted a private luncheon for the TUSIAD delegation with Senior Fellow and former Vice Chairman of the Board of Governors of the Federal Reserve Donald Kohn.

The Peterson Institute for International Economics senior fellows Jeffrey Schott and Caroline Freund provided a private briefing to TUSIAD members on the TTIP negotiations and prospects for a U.S. – Turkey free trade agreement.

Concluding the trip, the Ambassador of the Republic of Turkey and Mrs. Namik Tan hosted the visiting TUSIAD delegation at the Ambassador’s Residence for an evening of jazz.

Established in 1998 the TUSIAD Washington Representative Office works to develop and deepen the U.S. – Turkey relationship by strengthening mutual interaction.

Founded in 1971 as the voice of the Turkish business world, TUSIAD works for public interest by promoting participatory democracy, a competitive market economy, and sustainable development. Member companies account for 80% of Turkey’s foreign trade volume, 85% of corporate taxes, and 50% of private sector employment.