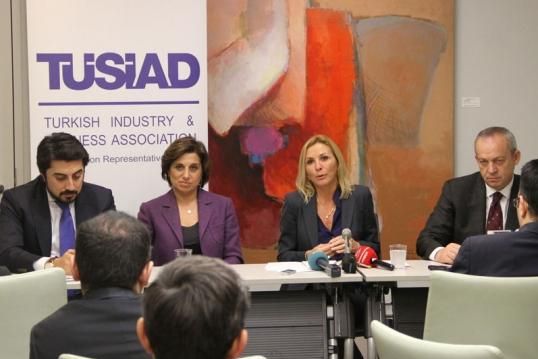 The TUSIAD delegation met Assistant Secretary of State for Economic and Business Affairs Jose Fernandez and exchanged views on improving economic relations between Turkey and the United States. TUSIAD has been a leading proponent of developing bilateral trade and investment relations between the two countries.

The visiting delegation also met Congressmen Gregory Meeks and Dan Burton and discussed prospects for U.S. – Turkey political relations. Congresswoman Virginia Foxx hosted a reception at the Capitol Hill Club for TUSIAD and Boyner and the delegation had the opportunity to meet with members and their staff.  Among

TUSIAD President Umit Boyner spoke at a conference hosted by The Brookings Institution exploring “The Next Phase of the U.S.-Turkey Strategic Partnership.” The event marked the launch of the TUSIAD U.S. – Turkey Forum at Brookings, a partnership focusing on U.S. – Turkey bilateral relations and Turkey’s role in the world. During the event, Professor Kemal Kirisci was introduced as the “TUSIAD Senior Fellow” at Brookings.