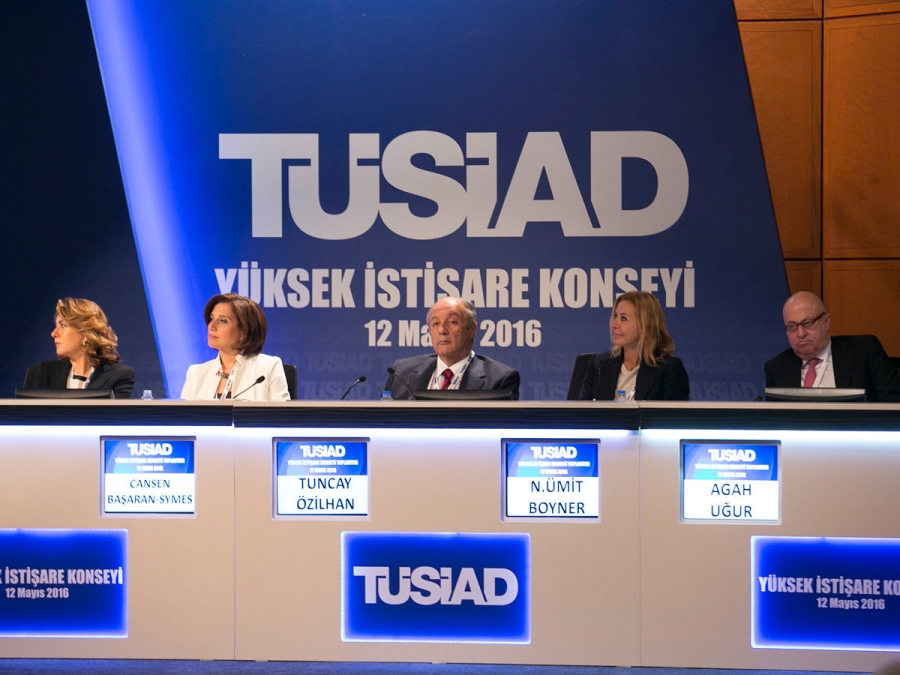 The President of the Turkish Industry and Business Association (TÜSİAD) Cansen Başaran-Symes spoke at the High Advisory Council of TÜSİAD in Istanbul on May 12, 2016. In her remarks, Başaran-Symes urged the incoming government to continue reforms and uphold fundamental democratic principles. Başaran-Symes also condemned terrorism and reiterated the importance of solidarity between Turkey and Western allies.

“Turkey’s economy has registered what can be considered to be high levels of growth, under current conditions. Despite terrorism and political uncertainties, the economy has displayed more resilience than expected. However, long term risks and structural problems persist.”

Expressing hope that the incoming government will implement reforms “with the same enthusiasm and determination,” Başaran-Symes called for economic policies that emphasize fiscal discipline, financial stability, and continuous reform to increase Turkey’s competitiveness.

President Başaran-Symes condemned the rise of PKK terrorism in the last year and the growing reach of ISIS, particularly in Kilis. She said, “Responsibility to find solutions and to provide security in Kilis, and elsewhere in country, rests with the government.”

“Counter-terrorism efforts, which we fully support, must prioritize measures that prevent the loss of security personnel and prevent developments from affecting civilians, but must also be done in a way that does not infringe on freedoms.”

She said, “We value security, the right to a fair trial, freedom of expression, and the right to assemble under all conditions. No matter what, we are on the side of a self-confident Turkey that is not afraid of free thought.”

In the context of disagreements between the EU and Turkey on the definition of terrorism she said, “We hope the problem is resolved without fracturing the relationship” and that “the EU should not have expectations that would hinder the fight against terrorism, given the threats facing the country.”

President Başaran-Symes said, “These developments show us that Turkey’s foreign policy needs to be reevaluated and the necessity of accounting for the past era in as objective a way as possible.”

Recognizing “we do not always agree with Western allies on every subject,” President Başaran-Symes said, “we know the importance of being in the Western alliance.” She continued, “Therefore we want to reiterate the importance of keeping open channels for dialogue and of protecting communication and diplomatic cooperation. We also expect our counterparts to be more sensitive to Turkey’s legitimate security concerns…”

President of TÜSİAD Başaran-Symes outlined that “Turkey is secular, democratic, a functioning market economy, a Muslim-majority NATO member, and an EU candidate.” She stressed the importance of secularism as “the guarantee of social peace and tranquility in Turkey” and said “debating the necessity of this principle is by no means legitimate.”

She continued, “Just as giving up on this principle would mean giving up on Turkey’s claim to modernity, far more seriously, it would disrupt societal balances, increase discrimination, and increase tensions. Given this reality, defending the principle of secularism by every authority, beginning with the President, is our assurance.”

“For a long time in almost every meeting, TÜSİAD advocates for judicial independence, rule of law, respect for property rights, and the protection and expansion of fundamental freedoms.”

“There are growing demands for the protection of individual rights, combating corruption, transparency in governing, and an equitable distribution of wealth. The improvement of Turkey’s democracy is closely related to these demands being heard in politics. Our country’s prosperity depends on our commitment to these values.”

President Başaran-Symes explained that “our embrace of the legal system, our insistence on transparency, and our desire to improve the health of our democracy is related to our country’s welfare and tranquility.” She concluded by saying “we believe the new government will work towards these principles.”