TÜSİAD held elections for the Board of Directors, High Advisory Council, Auditing Board, and Disciplinary Committee on January 12, 2017 during the 47th General Assembly. 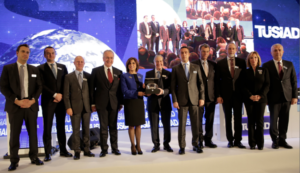 the General Assembly, TÜSİAD’s new board members were elected. Erol Bilecik was elected as the President of the Board of Directors while Ali Y. Koç, Simone Kaslowski, and Murat Özyeğin were selected as Vice Presidents.

In his speech Erol Bilecik said:

“For a globally competitive, stronger Turkey” we need to accelerate our work. Turkey can only achieve competitive strength, as a democracy with rule of law and extensive freedoms and as a society with technological, scientific, and artistic creativity. We will continue our work in this direction with determination.

I am a person whose own experiences have fostered my belief that this country has abundant human prosperity. Personally I see this as a very significant opportunity. I know well the level of success the people can achieve when presented with opportunities, support, education and self-confidence derived from science and reason. You can be sure that in this new term we will work very hard with our colleagues.”

The 2017-2018 TÜSİAD Board of Directors member and members of the High Advisory Council are listed below.