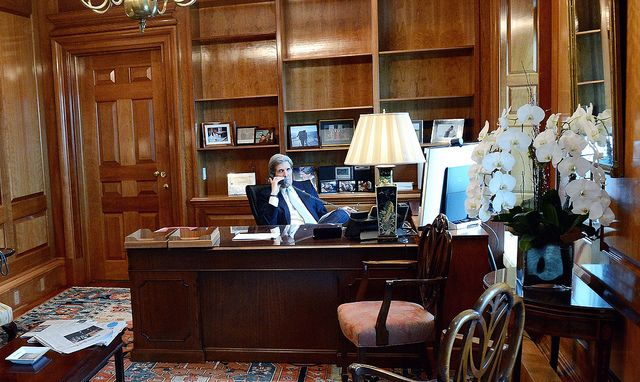 Secretary of State John Kerry is scheduled to stop in Turkey during his first overseas trip to Europe and the Middle East. State Department Spokesperson Victoria Nuland said “Secretary Kerry will travel to Ankara, Turkey, where he will meet with Turkish officials to discuss our strategic priorities – from ending the crisis in Syria to promoting regional stability, peace, and security – as well as explore areas to deepen U.S.-Turkey bilateral cooperation, including counterterrorism cooperation.”

The Secretary will travel first to London, the United Kingdom, where he will meet with senior British officials to discuss the range of bilateral and global issues on which we are closely coordinating.

He will then visit Berlin, Germany, where he will hold bilateral meetings on issues of mutual interest, as well as make a number of public appearances, including an exchange of views with German young people on the state of European-American relations. His visit to Berlin will also be an opportunity to reconnect with the city in which he lived as a child.

Secretary Kerry will then travel to Paris, France, with senior French officials to discuss our ongoing cooperation as part of the international effort to support Mali, as well as other issues of regional and global importance.

In Rome, Italy, he will meet with senior Italian Government officials and participate in a number of bilateral and multilateral meetings with our European allies to review the wider trans-Atlantic relationship and to discuss issues of global concern. While in Rome, Secretary Kerry will participate in multilateral meetings on Syria, and with the leadership of the Syrian Opposition Coalition.

Secretary Kerry will then travel to Ankara, Turkey, where he will meet with Turkish officials to discuss our strategic priorities – from ending the crisis in Syria to promoting regional stability, peace, and security – as well as explore areas to deepen U.S.-Turkey bilateral cooperation, including counterterrorism cooperation.

In Cairo, Egypt, Secretary Kerry will meet with senior Egyptian officials, other political leaders, civil society leaders, and the business community to encourage greater political consensus and moving forward on economic reforms. While in Cairo, the Secretary will also meet with Arab League Secretary General Al-Araby to consult on our many shared challenges across the region.

The Secretary will then travel to Riyadh, Saudi Arabia, to meet with the Saudi leadership and discuss our cooperation on a broad range of shared concerns. He will also participate in a ministerial meeting with counterparts from Gulf Cooperation Council nations. He will then visit Abu Dhabi, United Arab Emirates, to meet with senior officials and discuss our continued close coordination on issues of mutual interest.

The Secretary will conclude his trip in Doha, Qatar, where he will meet with Qatari leadership to discuss shared bilateral and regional issues of concern such as the ongoing crisis in Syria, Afghanistan, and Middle East peace.”